The Autonomous Car: Benefits and Dangers of Self-Driving Technology

Looking to be in the know about the autonomous car revolution? Self-driving cars have been around for over a decade now yet most of us still don’t fully understand how this technology works or even more significantly, its implications for our safety and lifestyle. Autonomous cars are built with advanced computers, sensors and algorithms that grant them autonomy replacing human control over driving decisions such as acceleration speeds, maneuvering lane changes and navigation in general. In this article, we will answer all your questions about self-driving technology reliability, risks, and future viability by examining both sides of one of today’s hottest topics: the autonomous car.

What is it and how does it work?

Autonomous vehicles, also known as self-driving cars, are changing the way we think about transportation. Powered by artificial intelligence (AI) and advanced robotics, they use sensors, cameras, and radar to navigate without human input. Autonomous vehicles can detect and react to their environment in real-time—from recognizing stop signs to avoiding obstacles on the road. This technology allows for more efficient and safer travel, as it eliminates the potential for distracted driving or human error behind the wheel. Additionally, autonomous vehicles have the potential to create less traffic congestion due to their ability to communicate with other cars on the same network. With these advantages comes an increased need for a secure data infrastructure that can support connected vehicle networks. As autonomous vehicles become more common in our cities and on highways, they will require reliable connectivity to transmit data between vehicles and ensure their safe operation.

How dependable are self-driving cars?

Self-driving cars have been heavily researched and tested by automotive companies, tech giants, and startups in recent years. Despite the amount of progress that has been made, there is still much to be done before self-driving cars can be considered reliable.

Reliability is a key factor when it comes to self-driving cars. Many people are hesitant to put their trust into a machine navigating them around on public roads. This mistrust has led to many governments imposing regulations and testing requirements to ensure that these vehicles are safe for public roads. Developers must first demonstrate that their cars can reliably recognize objects such as other vehicles, people, animals, signs, and traffic lights in order for them to pass regulatory tests.

Self-driving cars must also have the ability to make decisions on how they should react in different situations while on the road. These decisions may involve avoiding an obstacle or making a turn at an intersection. To do this effectively, the car must be able to accurately identify changes in its environment and make appropriate decisions quickly and safely. For example if a car detects another vehicle running a red light or coming too close it will either slow down or adjust its course accordingly. All of this requires complex software algorithms and sensors that can accurately interpret data from the environment.

Perhaps one of the most difficult tasks for researchers is ensuring that self-driving cars can interact reliably with other drivers on the road who may not obey traffic laws or follow standard driving etiquette. Self-driving cars will need advanced artificial intelligence (AI) capabilities in order to anticipate how other drivers may behave in certain scenarios so they can react appropriately without causing any harm.

Clearly, there is still much work left before self-driving cars can be considered reliable enough for everyday use on public roads. As automotive companies and tech giants continue their research and development efforts, standard safety requirements set by governments worldwide must be met before they become available commercially.

What are the potential hazards of autonomous cars?

As these vehicles are introduced to our roads, there is an important need to understand the potential risks associated with their use. Autonomous vehicles rely on complex computer algorithms and sensors to detect objects in their environment. Due to this reliance on technology, there are several potential hazards that can arise from the use of autonomous vehicles.

One of the most prominent risks associated with autonomous vehicles is that of cyber-attacks. With any type of connected device, there is always the risk of malicious actors attempting to hack into the system and gain access to sensitive information or control over the vehicle’s movements. In extreme cases, it could even lead to someone taking control of a vehicle remotely and using it for nefarious purposes. To reduce this danger, manufacturers must ensure that they employ robust security protocols when designing their systems.

Another potential hazard relates to the accuracy of the sensors used in autonomous vehicles. These sensors are responsible for detecting objects in their environment such as pedestrians or other vehicles and then making decisions based on this data. If these sensors fail to detect an object or misread its position then it could lead to dangerous scenarios such as collisions with other drivers or pedestrians. This risk can be mitigated by ensuring that all sensor hardware is adequately tested before implementation and regularly monitored once it has been put into service.

Finally, there is also a risk posed by human error when interacting with autonomous vehicles. It is possible for humans to misunderstand how an autonomous vehicle operates or make incorrect assumptions about its behavior leading them into dangerous situations. To reduce this risk manufacturers should ensure that all users receive adequate instruction when first operating a driverless car and provide clear warning signs if they need to take extra precautions while using one.

Overall, while autonomous vehicles offer many benefits they come with certain risks that must be managed effectively if we are going to reap their full potential without putting ourselves in danger. By understanding these risks we can take steps towards minimizing them and make sure that everyone enjoys a safe journey when using these new forms of transport technology in the future. 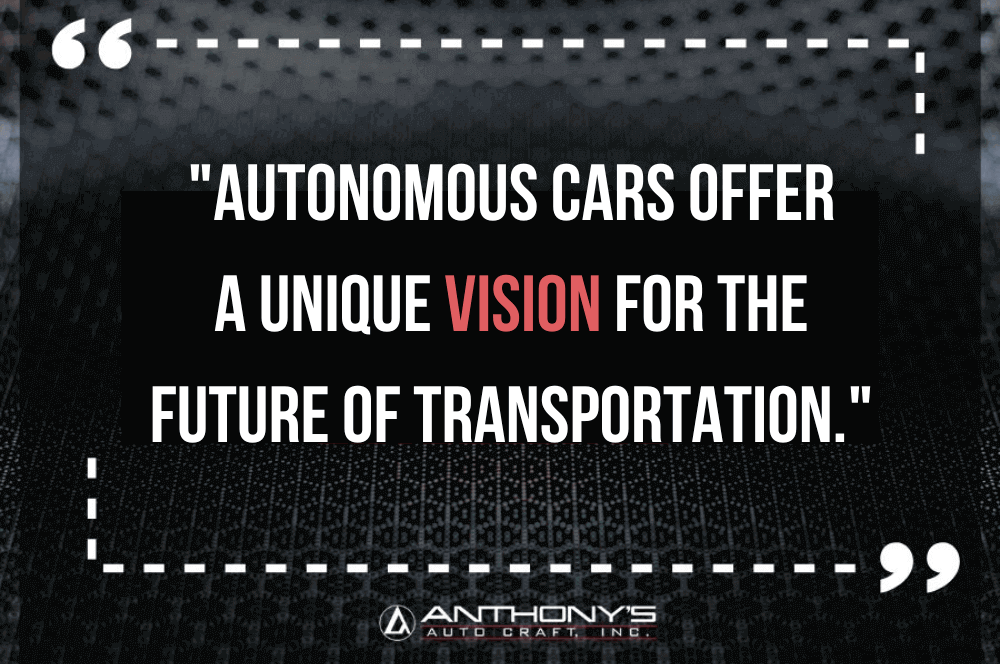 Are autonomous cars a viable option for the future?

Autonomous cars offer a unique vision for the future of transportation. They are powered by advanced artificial intelligence that allows them to detect, analyze, and respond to the environment around them. This makes them capable of navigating complex traffic situations, avoiding collisions, and performing tasks such as changing lanes or merging with other vehicles. Autonomous cars also have the potential to provide mobility solutions for people with limited access to transportation options in remote areas or those who need specialized care or assistance. Furthermore, autonomous vehicles can help reduce traffic congestion and improve energy efficiency since they can be programmed to follow optimized routes and drive more efficiently than humans.

The safety benefits of autonomous cars cannot be overstated either. By removing human error from the equation, autonomous vehicles are projected to significantly reduce the number of motor vehicle accidents on our roads every year. In addition, they can be programmed with specific safety protocols designed to protect both passengers and pedestrians alike.

However, there are some concerns that need to be addressed before autonomous cars can become a viable option for the future. For one thing, there is still a lot of research that needs to be done in order to perfect the technology behind these vehicles and make sure they are ready for public use. Additionally, there is also ongoing debate about whether drivers should retain control over their vehicles at all times or if they should give up complete control in favor of a fully automated system.

In conclusion, while there is still much work left to do before autonomous cars become a reality on our roads, it is clear that they offer an exciting vision for the future of transportation. With further research and development into this technology coupled with improved regulation and education on its usage and safety protocols, we could see autonomous cars become a viable option in the very near future.

Thanks for reading! If you’ve enjoyed this and are interested in learning more about the automotive world, be sure to check out some of the other blogs in Anthony’s Automotive Passion & Performance Collection.