Americans have been driving gasoline-powered cars for over a century, but the technology that powers them is constantly evolving. In 2015 the first fuel cell vehicles (electric cars) hit the American auto market and since we have seen a frenzy in the evolution and transition toward the electric-centric vehicle market overtaking the once prominently gasoline-powered autoworld. Let’s look into what fuel cells are, how they are used, and why this evolving technology will prove beneficial to the automotive industry.

What are Fuel Cells and How Do They Work?

Fuel cells are a form of energy conversion technology that directly converts chemical energy into electrical energy. Their operation is based on the simple process of electrolysis; two different substances are held close together, separated by an electrically conductive catalyst. As the two substances react, electrons flow along the catalyst generating electricity.

Fuel cells can be used in a variety of applications– from reliable backup power for hospitals, airports and other critical infrastructure installations to the power source for automobiles and more. They have numerous benefits over fossil fuels as they do not produce any emissions while working and they provide higher efficiency without compromising on reliability. Additionally, fuel cells are extremely modular in architecture which allows them to be easily configured for different applications. This makes fuel cells an increasingly attractive option as a potential source of green energy across markets.

Fuel cells have provided an invaluable source of clean and reliable energy for space exploration since their first use in the 1960s. Naturally, astronauts need a myriad of specific power-related needs – from portable fuel cells for individual equipment to more sophisticated power systems that keep spacecraft running – which is why fuel cells are such a great fit. They provide a constant and stable current, require minimal maintenance, and have infinite reactivity; all traits needed by those working out in space.

In addition, they produce no sound or vibration and only emit water vapor as their byproduct – making them unobtrusive during operations both in space and on the ground. To this day, their presence can be seen across NASA’s projects, from relaying radiation data about Mars to providing enough energy for the planned Moon-Mars missions in the distant future.

Fuel cells have been the subject of scientific discussion and research for decades, and it’s easy to see why. Compared with traditional combustion engines, fuel cells are significantly more efficient in converting stored energy into usable power. This is due to the technology’s ability to directly react hydrogen fuel with oxygen from the air, bypassing several inefficient steps involved in combustion engine operations.

Moreover, unlike combustion engines, which release a myriad of pollutants into the atmosphere, fuel cells produce only water and heat as byproducts. This allows them to function with greater efficiency while also helping alleviate some of the negative environmental impacts of combustion engine related activities. All things considered, it’s clear why fuel cell technology is swiftly gaining traction – not only are they more efficient than traditional engines, but they can also drastically improve our environment. 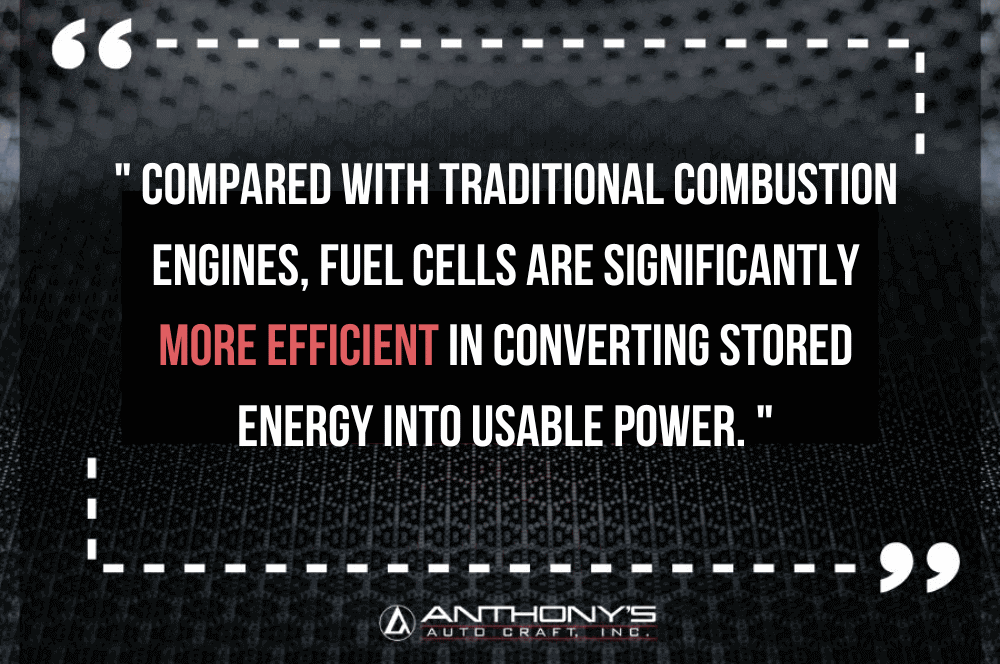 Fuel cells are quickly becoming the preferred means of power generation over combustion engines due to their significantly lower levels of pollution. Fuel cells generate electrical energy by chemically converting stored hydrogen and oxygen into water and heat, with the only by-products of this reaction being a small amount of harmless water vapor and heat.

In comparison, combustion engines utilize hydrocarbon fuels that generate large amounts of harmful pollutants such as nitrogen dioxide, carbon dioxide, and particulate matter. It is for these reasons that fuel cells are anticipated to become the power generating methods of choice for many applications in the future, including transportation and stationary electricity generation.

Fuel cells are a technology that produces electricity with remarkable efficiency. There is an array of different types of fuel cells, each utilizing a slightly different form of energy. Hydrogen-fueled fuel cells are the most common type and components such as catalysts, membranes and gas diffusion layers can be combined to create a customized design for applications in transportation, stationary power generation, portable devices and more.

Other fuel cell systems use natural gas or methanol to generate electricity without combustion, providing dramatically lower emissions compared to traditional sources such as diesel engines. Depending on the application, unique designs of these other types of fuel cells can offer improved performance at a cost effective rate. At their core all fuel cells use chemical energy from pumped materials to produce electrical energy resulting in high overall efficiencies from both the primary energy source conversion and consequent electricity production.

Fuel cells are a clean and efficient way to generate power and are forging a very dominant role in the future of energy resources utilized in our world including the automotive world. If you currently have an electric car or are looking into purchasing one, it’s important to know a little bit about fuel cells and how they work. We hope that this article has been informative for you.

It is also important to trust that the auto repair center that works on your electric vehicle is a specialist in this as well. Anthony’s Auto Craft specializes in electric vehicle repairs. Our motto is “quality without compromise” and that is also our promise to you. But don’t take our word for it… check out our reviews, history in this particularly specialized line of work, and research our list of factory-certified credentials. Contact us today to schedule an appointment for your electric vehicle and find out more about our customer concierge service and rental options to get you back on the road!