The Super SUV: Future of Driving or Just a Fad?

With superior off-road capabilities and powerful engines, the bigger and bolder design of the super SUV has earned its fair share of admirers amongst automotive enthusiasts globally. But are these luxury vehicles truly a game changer? Will super SUVs be here to stay, or do they represent just another passing fad? In this blog post we’ll dive deep into the unique features and examine all sides of the ongoing debate over whether they’re likely to shape the future of driving. So buckle up—it’s time for a journey into the world of luxury, power and high-performance SUV innovation!

What differentiates the SSUV class?

The super SUV (also referred to as the SSUV) is the highest level of luxury available in the SUV world. These vehicles provide a level of refinement, performance, and total luxury that exceeds even the top tier traditional SUVs out there. Super SUVs feature powerful engines that can reach up to 600 horsepower, four wheel drive systems for superior handling on all types of terrain, and even more interior space than other SUV classes.

Super SUVs are gaining in popularity due to their combination of luxurious amenities and impressive performance capabilities. For those who are seeking a vehicle that provides both comfort and power without sacrificing either one, these vehicles present an ideal solution. They’re perfect for those who lead active lifestyles but still want to enjoy luxury at the same time.

Increased safety features such as lane departure warning systems and advanced airbag systems make them attractive to families or those looking for a higher level of security while driving. Their styling is distinctive compared to other SUVs on the market meaning drivers can stand out from the crowd with one of these remarkable vehicles.

The rise of super SUVs marks a new era in the world of automotive engineering and design. With advanced capabilities, power, and comfort, these vehicles are designed to provide a superior driving experience while providing the stability and security of an SUV. One example of this is the Mercedes-Benz G-Class AMG G 63, which comes equipped with a powerful 4.0 liter V8 biturbo engine capable of producing 577 horsepower and 627 lb-ft torque. This luxury beast also features an impressive suspension system that offers adjustable damping for greater control on bumpy roads or off-roading terrains.

Its interior is packed with luxury amenities such as heated leather seats, dual zone climate control, and a panoramic sunroof. On top of it all, the G 63 has an impressive range of safety features including lane keep assist and blind spot monitoring systems to help keep you safe on the road. All these features make this vehicle one of the most impressive super SUVs currently on the market today. 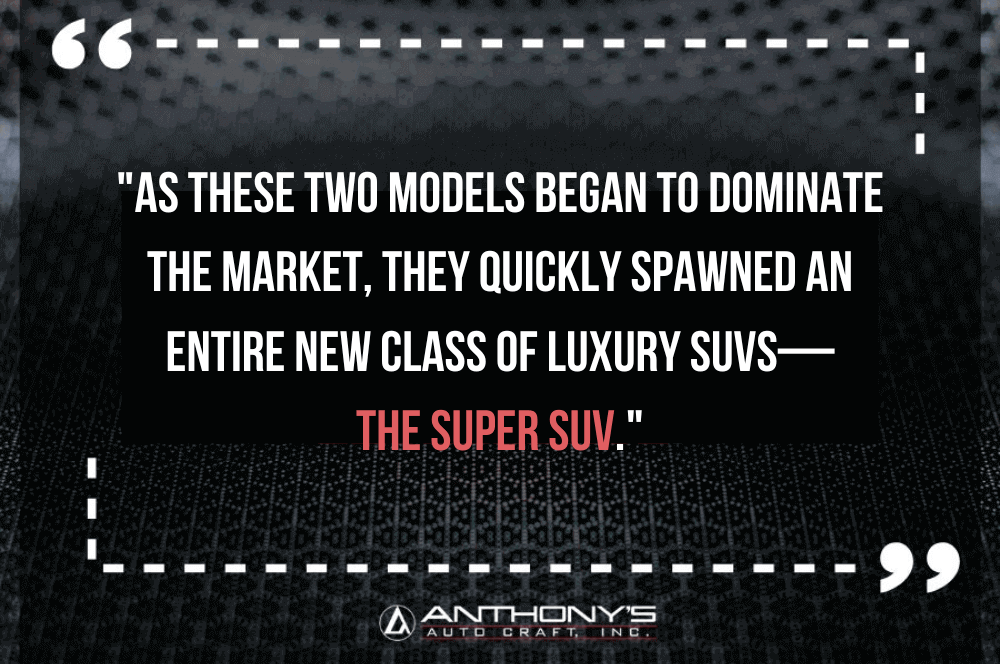 The emergence of the super SUV class has been spearheaded by a handful of automakers, most notably BMW and Mercedes-Benz. The BMW X5 was one of the first SUVs to enter this new category, offering seating for up to seven passengers, a luxurious interior and performance that rivaled some traditional sports cars. Mercedes followed suit with its popular GLE-Class model, which brought even more power and sophistication to the segment. This shift in SUV design allowed drivers to enjoy sporty handling and powerful engines without sacrificing any of the utility that defines the SUV class as a whole.

As these two models began to dominate the market, they quickly spawned an entire new class of luxury SUVs—the super SUV. The Urus was unveiled at a launch party in December of 2017, where Lamborghini claimed the debut of the world’s first SSUV. Today there are dozens of options available from a variety of manufacturers including Porsche, Maserati, and Rolls Royce just to name a few. Drivers are now given unprecedented levels of choice when it comes to finding a vehicle that fits their lifestyle.

Pros and Cons of the Super SUV

When it comes to SSUVs, there are both pros and cons to be considered before making a purchase decision. In general, super SUVs offer more power, features, and luxury than traditional SUVs, but they also tend to cost more initially and provide lower fuel economy.

On the plus side, these models often come with features that aren’t available in a basic SUV. Many of these models have extra seating capacity, advanced safety technology, and more powerful engines. For example, the Audi Q7 is one of the most popular super SUV’s on the market today; it offers seven passenger seating, top safety ratings from the Insurance Institute for Highway Safety (IIHS), and a turbocharged V6 engine that can produce up to 335 horsepower.

On the other hand, super SUVs generally come with a much higher price tag. This is due in part to the added features they offer – such as larger engines and improved safety systems – which can bump up their cost significantly. Additionally, many of these vehicles have poor fuel economy ratings due to their heavier weight and larger engines: for instance, the Audi Q7 has an EPA-estimated fuel economy rating of only 19 mpg city/25 mpg highway. While these vehicles may offer more power and comfort than regular SUVs, they may not be worth their premium price tag when factoring in decreased gas mileage or longer financing terms needed to afford them upfront. In the end, it really comes down to the consumer, their budget, and their needs.

The Impact of Super SUVs on the Automotive Market

The release of the Porsche Cayenne in 2002 was a game-changer for the automotive market. Although it was labeled as a “sport utility vehicle,” or SUV, it also had the performance capabilities of a sports car. With its impressive engine, six-speed transmission, and state-of-the-art design, the Porsche Cayenne marked the beginning of what is now known as the super SUV.

This new breed of vehicles is becoming increasingly popular among consumers in most recent years. As a result, manufacturers have responded accordingly; since its release, Porsche’s sales have skyrocketed due to increased demand for the Cayenne. In 2017 alone, Porsche sold over 68,000 units of their flagship model which is more than double the number sold in 2015.

This trend has been echoed by other automakers as well; BMW’s X5 and X6 models have seen similar success since their release in 2014 due to their performance capabilities combined with their stylish design elements. Similarly, Jeep’s Grand Cherokee SRT packed in a powerful V8 engine that can take on any terrain while still providing luxurious amenities inside the cabin. It is clear that super SUVs are proving themselves to be extremely profitable for car makers, and are becoming increasingly popular amongst consumers who want performance without sacrificing roomy comfort and style.

Are Super SUVs Here to Stay or Just a Passing Fad?

The abundance of benefits that consumers are responding to with the super SUV of late is undeniable. But whether these vehicles are here to stay or just another passing automotive fad is a question that many industry experts are asking. On one hand, SUVs have grown to be a top-selling vehicle segment for many carmakers, with U.S. sales up nearly 9% in 2020 alone, meaning their popularity isn’t showing any signs of slowing down anytime soon.

On the other hand, some analysts suggest that the higher cost associated with super SUVs could cause buyers to opt for cheaper alternatives if economic conditions worsen, leading to their eventual demise. Additionally, environmental concerns may also lead to a decrease in sales as consumers become more conscious about their impact on the planet. Ultimately, only time will tell if these luxurious giants will remain a staple on the automotive landscape or fade away into obscurity.

At Anthony’s Auto Craft, we provide world-class mechanical and collision repair services for super SUVs and other luxury vehicles. We are dedicated to providing the best possible service to our customers and guarantee your satisfaction with our work. If you are looking for a reliable and professional auto repair service provider, then look no further than Anthony’s Auto Craft. Contact us today to schedule a consultation or visit us online to learn more about our specialized services.