Ferrari Joins the Luxury SUV Competition After Years of Apprehension

After years of apprehension and flouting the idea of producing an SUV despite phenomenal pressures, Ferrari has finally entered the luxury SUV market with the unveiling of their new Purosangue. However, Ferrari insists that their first four-door production vehicle is far from a “sport utility vehicle.” The hotly-anticipated Purosangue is set to compete against other luxury SUVs like the Lamborghini Urus and Bentley Bentayga, providing high-powered performance and exclusive features that adhere to the luxurious standards set by its predecessors. Given Ferrari’s reputation for quality engineering and design, this vehicle is expected to be a driving force in the industry – quite literally. And while some purists may be skeptical of Ferrari’s foray into this market segment, the Purosangue is sure to turn heads with its sleek design and powerful engine. Here’s a closer look at the hype around this new SUV.

Ferrari’s Past Remarks on the Idea of Producing an SUV

In March 2017, Ferrari CEO Sergio Marchionne famously stated that a Ferrari SUV would only be constructed “over his dead body”. This declaration by Marchionne, who had been at the helm of the renowned Italian automaker since 2014 until his untimely death in 2018, came seemingly out of nowhere and sparked tremendous debate among industry experts and car enthusiasts alike. Marchionne was clearly pointing to Ferrari’s established brand identity as a performance-centric automaker, one with no history developing or marketing an SUV; doing so would mean compromising those well-regarded values and as also stated by Marchionne, “bastardize the brand”. After Marchionne’s remarks, Ferrari had mostly stayed away from any rumors or speculation about a potential move into the luxury SUV market and are claiming the Purosangue is not of that classification. 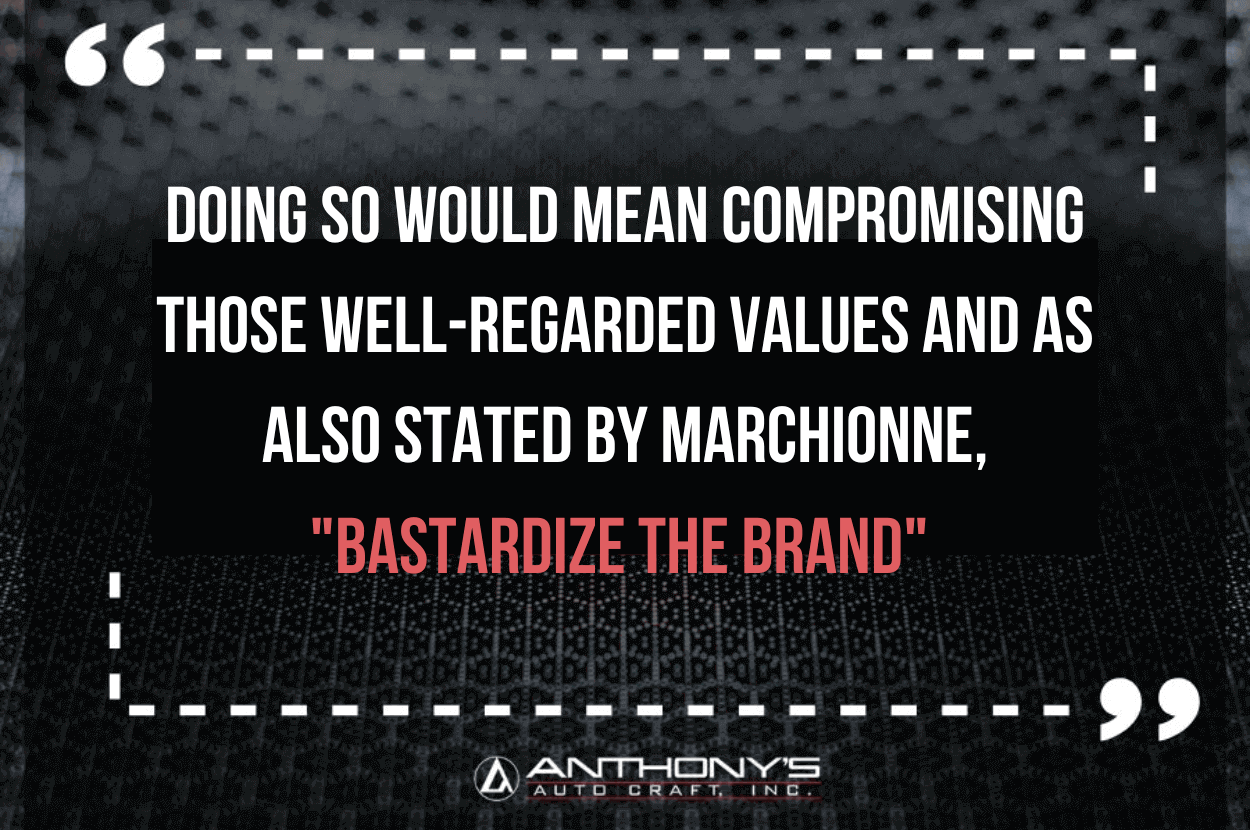 Design & Features of the Purosangue

From the powerhouse that is Ferrari, the Purosangue (Italian for “thoroughbred”) takes on an aesthetic unlike any other from the luxury automaker. The V12 engine produces a staggering 715 hp, propelling you to 62 mph in only 3.3 seconds and a top speed of 193 mph. But it’s not all about speed – this vehicle comes with innovative design and cutting-edge technology, both in its cabin and exterior. Its unique doors provide effortless entry/exit with rear-hinged back doors. The luxurious interior touches include the traditional Ferrari details that provide an intimate connection to the car’s capabilities while offering optimum comfort and satisfaction for all passengers. Four separate seats with individually customizable features including heated seats make the ride an enjoyable one for all involved. With its remarkable V12 performance, striking design elements, and opulent interior the Purosangue demands a premium price tag of almost $400,000.

Purosangue Set to Compete Against Other High-end Brands

The Purosangue is set to shake up the high-end SUV market as it competes with brands such as Bentley, Rolls-Royce, and Lamborghini. This iconic sports car producer has outdone itself with a luxurious blend of features and performance. Although the Purosangue is loaded with an incredible array of features including those previously noted as well as all-wheel drive, a 4×4 transmission, and an adjustable ride height control system, it is definitely not capable of off-road adventures. However, this compilation of impressive features should make the Ferrari Purosangue a formidable contender in the ultra luxury SUV segment when competing against some of the biggest names in automotive history.

Some Are Skeptical About the Move

Ferrari’s history has been built on performance and exclusivity, setting the highest standards for a history of lauded cars. Whether it be in the GT class or on the racetrack, Ferrari has consistently produced vehicles that remain true to the DNA of its brand history. That is why, when Ferrari announced the release of the Purosangue, opinions were divided: Some see it as a dilution of their iconic brand history, while others believe it will be an opportunity to bring an entirely new level of performance to a previously unexplored market. Ultimately only time will tell how the Ferrari Purosangue will be received in this competitive space – but given the brand’s history, whatever they do is likely to be groundbreaking.

How Will Ferrari Fare in this New Market?

The Purosangue presents new opportunities for Ferrari, who have largely remained in their traditional sports car niche and is arguably its most ambitious venture into a new market segment. This foray into the luxury SUV market could open the doors for Ferrari as it has already proven to be immensely profitable for some of Ferrari’s rivals. The market is definitely experiencing a surge of interest these days, with manufacturers from all across the industry vying for attention. It’ll be an exciting development to see how Ferrari is able to differentiate itself from these other luxury offerings and bring something unique and distinct to this market. The Purosangue is sure to be a great example of adapting a winning recipe to cater for changing consumer habits and trends if it takes off as Ferrari attempt to make their legendary name synonymous not only with quality, but with ubiquity in modern luxury driving.

Stay tuned for more information on this exciting new release from Ferrari. If you’re interested in learning more about Ferrari or Italian automobiles in general, be sure to check out some of the other blogs in Anthony’s Automotive Passion & Performance Collection.