Rev Your Engines: A Guide to the Best of Chevy Muscle Cars From The 1960s

If you’re a muscle car enthusiast, then nothing can quite rival the thrill of owning and driving an iconic Chevy muscle car from the 1960s. From their striking design to their powerful engines, these classic rides have been delivering thrills for decades – and still continue to turn heads on the street today.

In this guide, we’ll take you through some of the best Chevy muscle cars that came out of those heady days in automotive history: which models to look out for, what makes them so special, and how you can get behind the wheel yourself! Let’s fire up those engines and explore all-American performance at its finest.

The Legacy Of The 1960s Chevy Muscle Car

The muscle car is an iconic piece of automotive history, something that has been celebrated in countless Hollywood films, a symbol of Americana. It all began with the Chevy Muscle Car, a car that changed the way people thought about cars and what they could do. The Chevy Muscle Car was first introduced in 1964 as a high-performance version of the popular Chevy Impala. This car packed a powerful V8 engine capable of producing over 375 horsepower, making it one of the most powerful cars available at the time. Since then, numerous other models have followed in its footsteps, from the iconic Chevy Camaro to more recent models like the Corvette. 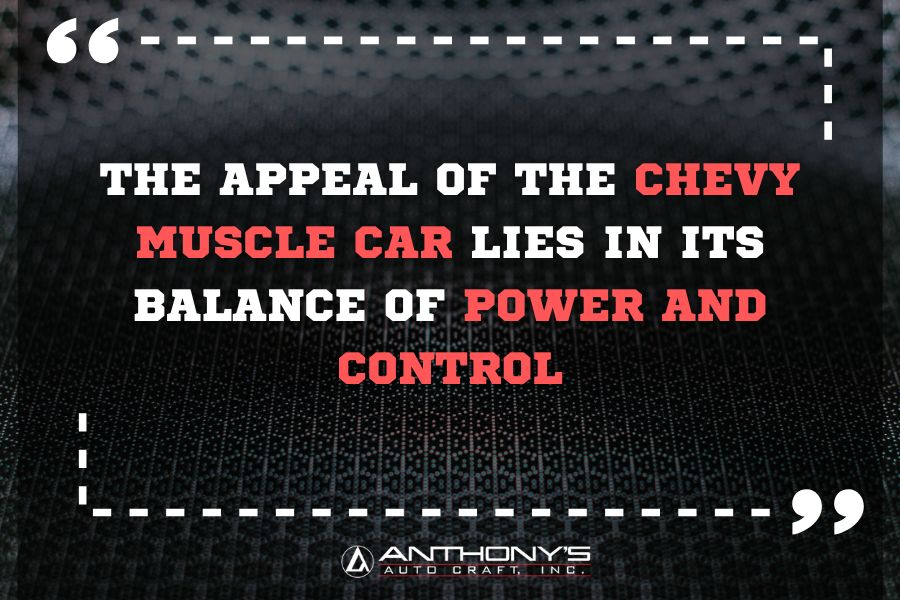 The appeal of the Chevy Muscle Car lies in its balance of power and control. With its combination of speed and handling, drivers can get a feel for what it’s like to be behind the wheel of a real racecar without having to leave their driveway. Many owners seek out classic versions to restore them to their former glory or customize them for even more performance.

The legacy of the Chevy Muscle Car lives on today in both original and modified form. From man cave decorations to full-on restoration projects, each vehicle has its own unique story and place in history. It’s no wonder why this type of car continues to be so popular among enthusiasts around the world; not only is it an amazing piece of engineering but it also holds sentimental value for anyone who has owned one or simply been inspired by its timeless style.

The 1960s was a truly iconic decade, and this is especially true when it comes to popular classic models that were produced during this time. During the decade, four cars emerged as the most sought-after models in the United States: the Chevelle, Camaro, Impala, and Corvette. Each of these vehicles has stood the test of time and still remain highly sought after by car collectors today.

Chevrolet’s Chevelle was first introduced in 1964 as a mid-sized car available with straight 6 or V8 engines. It quickly became popular due to its affordability and ability to customize with numerous performance upgrades. The Chevelle offered excellent handling characteristics combined with muscle car power, making it a great choice for drag racers and street tuners alike.

In 1966, Chevrolet released the Camaro as a direct competitor to Ford’s Mustang. The Camaro featured a wide range of engine options ranging from I4 all the way up to big block V8s which made them an extremely desirable choice for muscle car enthusiasts. Its sporty design also made it popular among those looking for something stylish yet powerful enough for daily driving needs.

The Impala was introduced by Chevrolet in 1958 but was not fully redesigned until 1965 when it received a full restyle inside and out. It featured a smooth ride along with lots of interior space perfect for families who needed something larger than your average sedan. The Impala remains one of Chevy’s most successful nameplates due to its classic styling that is still relevant today.

Finally, there’s the venerable Corvette which debuted in 1953 as General Motors’ flagship sports car model. It gained significant popularity throughout the ’60s due to its high-performance engines coupled with advanced suspension technologies that provided excellent handling characteristics along with blistering acceleration numbers on par with some of the best production cars at the time. Today, Corvettes remain highly coveted collector’s items thanks to their timeless design and impressive performance capabilities which have stood up against more modern competitors over time.

These four models have become automotive icons since they first hit showroom floors in the ’60s and still remain popular today amongst enthusiasts of all ages looking for an affordable classic vehicle option that offers both style and performance capabilities at an affordable price tag compared to many newer model year offerings currently on sale today.

The Chevrolet muscle car is an iconic classic that has been around for decades. With its unmistakable design and power, it’s no surprise why these cars have been so popular over the years. In order to really appreciate what makes a Chevy muscle car special, we need to look at the three defining elements: design, performance, and innovations.

Design has always been a major factor when it comes to the success of any car – and this especially holds true for muscle cars. Muscles cars are meant to stand out from the crowd with their bold and aggressive designs. The Chevrolet muscle car is no different with its long hoods, curves body panels, and dramatic accents like fender flares and spoilers. All of these details come together to create a signature look that is hard to replicate.

Of course, looks are nothing without performance – and this also plays a vital role in making a Chevy muscle car so special. These cars were made to be powerful machines capable of incredible speeds and acceleration. From the roaring V8 engines to the finely tuned suspension systems – every aspect was designed with performance in mind. This attention to detail has allowed these cars to remain competitive even after all these years.

Finally, the Chevrolet muscle car wouldn’t be complete without innovative features that make driving them both fun and safe. Innovations like air conditioning systems, advanced brakes, anti-lock systems, traction control – all of which have become commonplace in modern vehicles but were considered cutting edge when they were first introduced on Chevy muscle cars decades ago – help make these vehicles stand out from other classic cars on the market today. Plus they can also add comfort while providing better safety features than older models had available at the time.

When you combine all of these elements together – stunning design, unmatched performance prowess, and pioneering innovations – it’s easy to see why Chevrolet Muscle Cars have remained popular over so many years!

When looking to purchase a classic Chevy muscle car, there are several key steps that should be taken in order to ensure that you get the best possible deal. First, it is important to do your research and become familiar with the different models of Chevy muscle cars available. Knowing what features are standard on each model will help you determine which one is the best fit for you. Additionally, it is important to know what years the cars were produced and how they have changed over time so that you can make an informed decision when selecting a vehicle.

Next, it is a good idea to attend classic car shows and auctions in order to get an idea of not only the current prices of these cars but also how much they can be restored for or modified. Additionally, getting an up-close look at these vehicles can help you narrow down your desired choice even further and discover which model might require more work than others.

Also, when looking at potential purchases it is critical to look closely at all aspects of the car such as its bodywork, interior features and engine condition. While speaking with the owner or seller of the vehicle, be sure to ask many questions about its past maintenance as well as any service records that may exist for it. This will give you a better understanding of what repairs may need to be done in order to get it up and running like new again.

Finally, when making any type of significant purchase such as this it is important that you take enough time before signing on any dotted lines or handing over payment so that you can properly evaluate all options available and make sure that everything meets your expectations before committing to a purchase. Doing so could potentially save yourself from costly repair bills down the road and provide more assurance that your classic Chevy muscle car will provide years of enjoyment and satisfaction.

The 1960s were an amazing time for muscle cars. Chevy, in particular, released some of the most iconic vehicles of the era that remain popular to this day. The Chevelle SS was one of the earliest examples of a muscle car and featured a big-block V8 engine and performance suspension. Other models included the Corvair Monza, Impala Super Sport and Camaro RS. These cars were lightning fast and could go from zero to sixty in under six seconds.

Although these cars were incredibly powerful and fast, they also had some drawbacks that made them less desirable than their modern counterparts. They had limited seating compared to newer models, which meant they weren’t great for family trips or road trips with friends. Additionally, they often had poor fuel economy due to their larger engines and lack of aerodynamics. Finally, these cars were notorious for mechanical issues due to their high levels of power, so upkeep costs could be expensive over time.

Despite these downsides, there is no doubt that Chevy muscle cars from the 1960s will always remain an important part of automotive history. These classic vehicles are beloved by car enthusiasts all over the world who appreciate their timeless style and raw power. Whether you’re looking for an old-school project or just want something unique to cruise around town in, you can’t go wrong with a classic Chevy muscle car from the ‘60s!